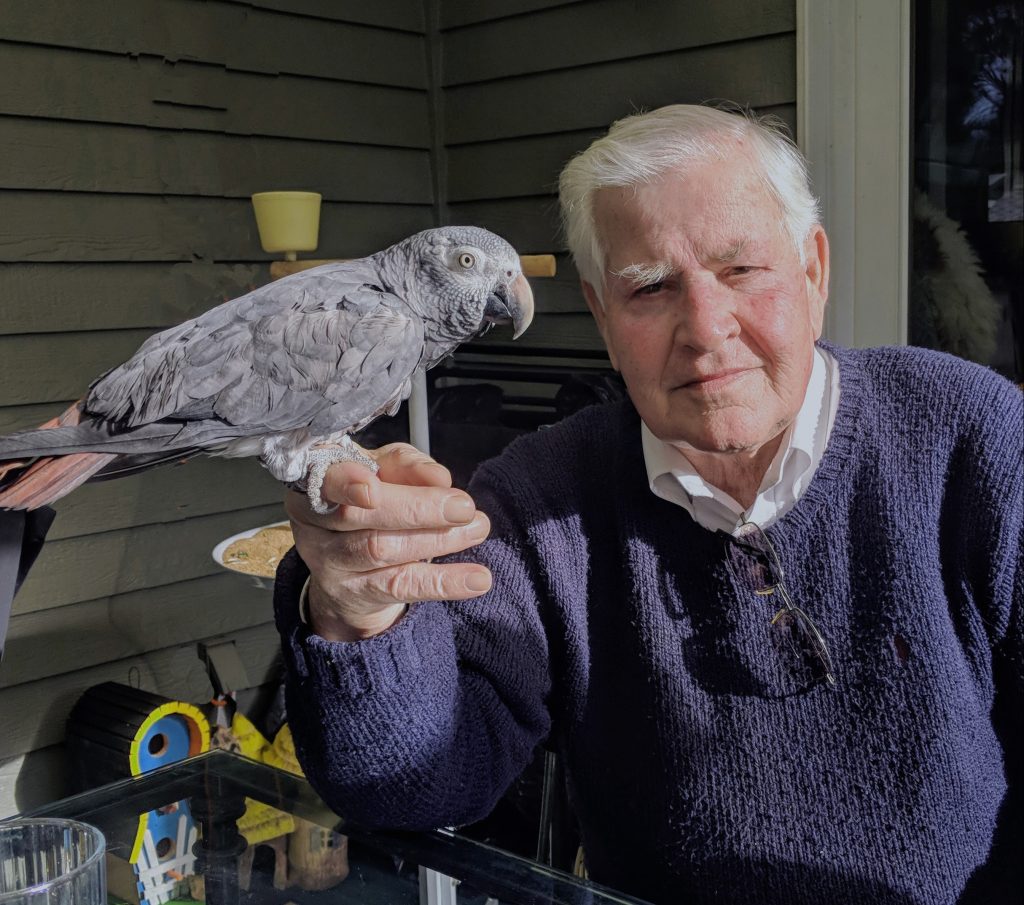 The Idaho Humane Society lost a great leader and friend earlier this January. Our former Executive Director, Roger Schmitt, was instrumental in crafting the vision and implementing strategic decisions that were pivotal in changing IHS into the state-of-the-art shelter that it is today.

Roger understood that those outside the shelter environment with critical skills could help carve a new path and help our organization improve upon challenges faced. Ultimately, he expanded the number of board members and began recruiting new members with varying professional skills to lead IHS into its next chapter.

An avid researcher, Roger implemented shelter best practices into commonplace procedures, including the precedence to spay/neuter every adopted dog and cat from our facility as an effective means to stop overpopulation. To best capture our successes and challenges, he implemented professionalized reporting practices and statistics and set out to engage the community with dynamic fundraising and marketing. The Lawn Party, which celebrated its 28th year in 2018, was the largest fundraising event in history for the Idaho Humane Society. See Spot Walk also began under his leadership, and we are proud to celebrate the 28th annual event this year!

Idaho Humane Society’s current CEO, Dr. Jeff Rosenthal relayed, “Roger Schmitt was a charismatic and dedicated leader to the Idaho Humane Society whose decisions have positively impacted the lives of tens of thousands of animals as well as the families who love them. We extend our deepest sympathies to Roger’s family at this time.”

You can read Roger’s obituary that his family wrote below:

Roger, 82 died peacefully at home with his wife by his side. He was diagnosed with stage IV prostate cancer August ’17 and was the epitome of the Energizer Bunny through early summer 2019.

Roger was born and raised in Clifton & Montclair New Jersey, the only child of Edythe Clericuzio Schmitt and Karl Schmitt. He was preceded in death by his parents and is survived by his wife of 40 years, Mady Rothchild of Boise, ID and first cousin, Jerry & Cyndee Tuma of Bullhead City, AZ.

Roger graduated from Seton Hall Prep School in 1956 and attended his freshman year at Princeton University in 1957 before joining the New Jersey Air Nat’l Guard and entering the Aviation Cadet Program.  In 1958 he completed USAF Pilot Training at Greenville, MS., Class 59C.

He returned to duty with the NJ ANG checking out in the F-84F fighter following pilot training and worked for a short time with Delta Airlines as a flight engineer.

During the early 1960’s Roger went on active duty and was assigned to fly F-84 fighters at RAF Bentwaters, UK.

In 1966, Roger, who by then had checked out in the F-4C Phantom, was assigned to the 390 TFW at Da Nang AB, Republic of Vietnam, flying missions in both South and North Vietnam as well as Laos. He was a proud member of the Red River Valley Fighter Pilots Association.

Following completion of his SE Asia tour in 1967, he was assigned to the 15th TFW at MacDill AFB, FL as an RTU instructor training pilots en route to SEA.

In March 1970, while stationed at MacDill AFB, Roger was selected to join the newly reorganized 43rd TFS, which was moved from MacDill to Elmendorf AFB, AK in June 1970 and assigned the ‘air defense of Alaska’ mission.  Roger served as Flight Commander and then Assistant Operations Officer of the 43rd TFS between mid-1970 and late 1973 when he volunteered to return to Vietnam for a second tour of duty flying the F-4E Phantom. In 1975, during this second Vietnam tour, Roger was a senior strike flight commander during the Mayaguez incident off the coast of Thailand.

His tour in Alaska had afforded Roger the opportunity to enjoy ‘world class’ hunting of Black bear, Dall sheep, as well as a Boone & Crockett ranked Grizzly Bear. His love for speed translated into racing snowmobiles and driving fast cars, of which he had several throughout his life.

Therefore, it was no surprise when Roger ‘volunteered’ to return to Alaska after his 2nd Vietnam tour in the Spring of 1975, where by this time he had accumulated over 3000 hours in 4 different models of the F-4 Phantom. Now a Lt. Col., Roger continued to ‘fly jets for the Air Force’ and was soon assigned as Commander of the new A-10 squadron being located at Eielson AFB, AK.

In the late spring of 1978, Roger met Mady Rothchild in Anchorage, following her recent relocation there from San Francisco. Soon after, Roger was re-assigned to HQ TAC at Langley AFB, VA.

Mady followed Roger to Langley in late 1978 and they were married Dec 27, 1979 in Boise, ID. They made their home in Poquoson, VA., while Roger ‘flew a desk’ in the Plans Division of HQ TAC, completed his MBA and was promoted to ‘full’ Colonel.

In mid-1981, Roger was reassigned from HQ TAC to the 479th Tactical Fighter Wing, Holloman AFB, Alamogordo, NM as Director of Operations. Roger retired from the United States Air Force at Holloman AFB in 1984 wearing the wings of a Command Pilot with over 4000 hours in fighter aircraft. He has multiple citations and awards including the Legion of Merit, Distinguished Flying Cross, Air Medal.

Roger and Mady initially moved to McCall, Idaho following retirement and then relocated to Boise in 1985. They moved into their ‘forever’ home in Boise in 1989,

In 1986-99, his wife’s animal passion somehow put him in the position of accepting what was to be a ‘few months stint’ as Director of the Idaho Humane Society, to help them get back on their feet as they were struggling with leadership and management issues. The ‘few months’ turned into 13 years. In the late ‘90’s, Roger oversaw the construction of a new Humane Society building, replacing the very decrepit structure that had originated in the late 30’s/early 40’s.

Roger was an avid golfer, past president of Crane Creek Country Club and oversaw its 2006 clubhouse renovation as well.

Mady and Roger enjoyed a great life together, flying, boating, golfing, traveling and loving every minute of their peaceful, tranquil home and property. They both very much enjoyed the many large and small parties they hosted in their lovely yard over the past 30 years.

At Roger’s request there will be a private family/close friend interment at The Idaho Veteran’s Cemetery, 10100 Horseshoe Bend Rd. Thursday, Feb. 6th at 11 am. Please arrive 15 minutes early if you are attending.

He was a man of few words with a multitude of accomplishments. He was “just a simple fighter pilot” never believing how he could be paid for doing what he loved. We’ll miss ‘ya man!