It’s time once again to help our 12 Strays of Christmas find loving homes for the holidays!

Every weekday between December 9th and December 24th, we’ll be presenting an adorable, adoptable companion animal… our annual adoption celebration sponsored by our friends at Bronco Motors.

Watch live on the KTVB News at Noon or visit their website to see the 12 Strays of Christmas at a later time.  Tune in and meet special dogs, cats, and maybe even a bunny who’ll all be hoping to find their forever homes this holiday season, each one introduced by wonderful shelter volunteers. Then follow along on our website and social media while we update each pet as they are adopted! 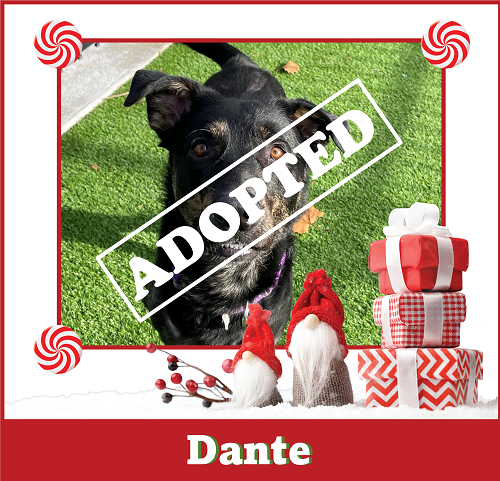 Dante is our darling STRAY #1 – He’s a happy, jolly soul who wants to connect with his people. This 1-year-old Shepherd mix came to us as a transfer from Sacramento, California. He had been hit by a car and was in desperate need of medical care. The Idaho Humane Society performed orthopedic surgery on his front and back leg and he now has a new lease on life!

Dante will make a lovely holiday addition with a family who can spend lots of time and attention doting on him whether that is walking him on a leash, chasing a toy, or snuggling up under the covers in the evening. 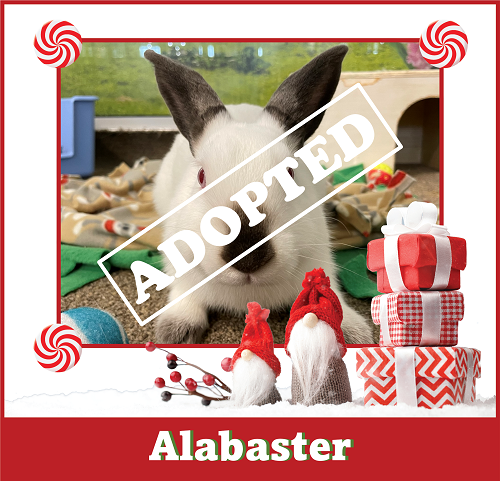 Alabaster is dreaming of a white Christmas with his forever family! This bunny is just 4 months old and friendly. He can be a bit shy and doesn’t mind being gently picked up. Did you know rabbits can be litter-boxed trained to live indoors just like cats? Maintenance is fairly easy, but rabbits do need to be handled regularly and will need regular kennel cleaning. Alabaster would make a terrific pet for kids from one to ninety-two! Please consider adding this sweet boy to your home to make your season merry and bright! 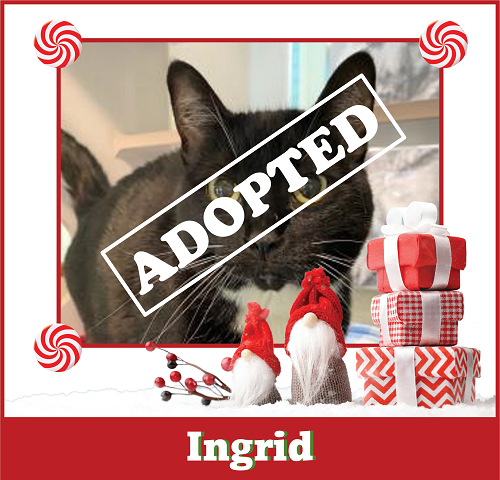 Ingrid is our third Stray of Christmas at the Idaho Humane Society. She’s in the mood to celebrate the holidays with her loved ones by cuddling up on the couch, watching the crackling glow of a fireplace and enjoying the finer things of life at 10 years of age. She has grown to be quite independent and isn’t a fan of sharing her space with other animals and will need to be the only pet. She would do best in a quiet home with a slower pace since she is older. This cuddle-buddy is house-trained and is sure to make your home merry and bright! 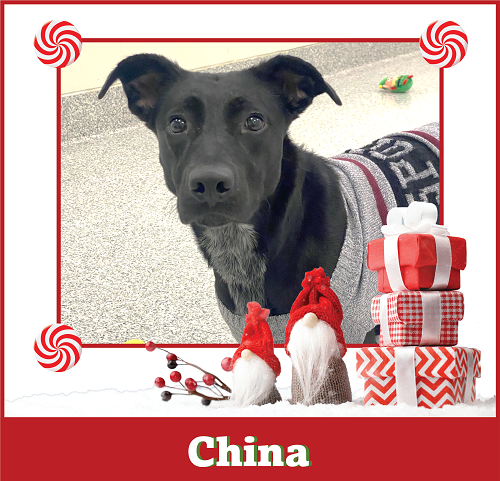 China is our sweet and shy Stray number four. She’s a 1-year-old black lab mix who came from an overwhelmed owner, where she did not get a lot of love and attention. She has grown leaps and bounds here at our shelter, and we’re so excited for her future. China will be making your spirits bright this Christmas as a new addition to your forever home. She can deck the halls with her love of chasing balls, discovering a new stuffed animal, and would adore spending the evenings with the lights turned down low. China is a bit nervous and would do best with teens or in an adult-only household. 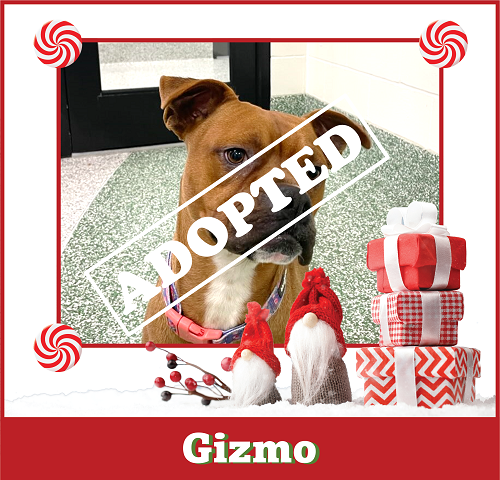 Sweet Stray number five is Gizmo, a 1-year-old male Boxer mix. He’s an energetic sweetheart who enjoys running and exploring a room while dancing around. Some might say he would enjoy a-wassailing among the leaves so green. He’d love to find a family to join a-wandering, so fair to be seen with kids 8 years and older. He is a big fan of playing and loves chasing balls. He could be a good fit with other pets as home, so ask our staff to meet Gizmo and introduce your pets to him. This spunky dude is wishing that love and joy comes to you, and to you a wassail, too (a hot mulled cider drink!) 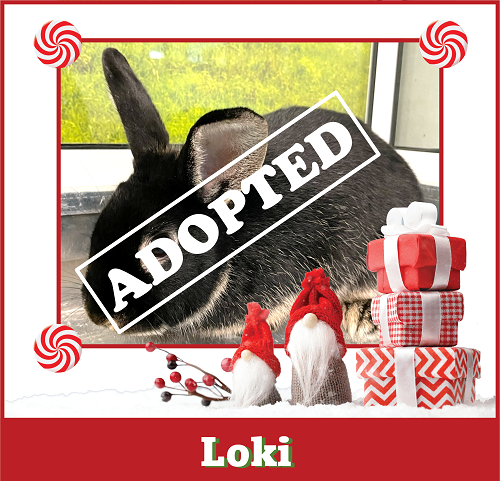 Our sixth Stray of Christmas is a lovely rabbit named Loki. He’s a handsome 8-month-old boy that doesn’t mind being picked up and doted on! He’s looking at a Blue Christmas without a forever family, but if you adopted Loki, your heart would be light and all of Loki’s troubles will be out of sight… so adopt Loki and have yourself a merry little Christmas now! 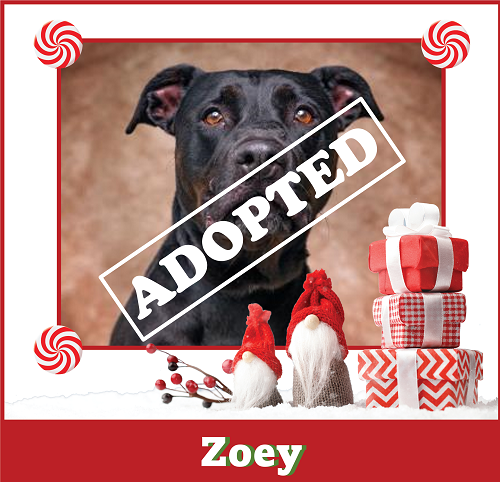 Our seventh Stray of Christmas is Zoey! She knows that the weather outside may be frightful, but the fire is so delightful! She’s looking for a new family to spend time with when there’s no place to go. Zoey has never met a stranger and loves every human that she meets. She is great with toys and would make a great walking, hiking, or running companion. She is also terrific with kids, but does not like to share the attention and will need to be the only animal in the home. After you meet this loveable sweetheart, you will see she is the only furry friend you need! Bring her home and let it snow, let it snow, let it snow!! 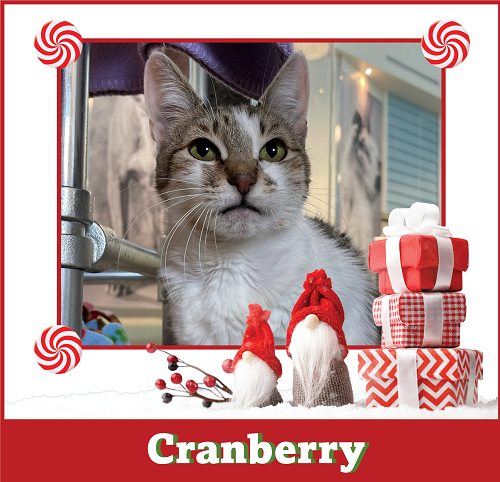 Our eighth Stray of Christmas brings us to adorable, charming Cranberry. She is excited to meet new friends and while she has no teeth, she loves snacks! She would love to cuddle up for some scratches and catnip, but also enjoys quiet time alone. She is FIV+ positive which means she needs to remain indoors and must not share a home with other cats unless they are FIV+ as well.  Do you hear what I hear? A meow, a meow, dancing in the night. With a tail as big as a kite! Adopt her into your forever home – she will bring you goodness and light! 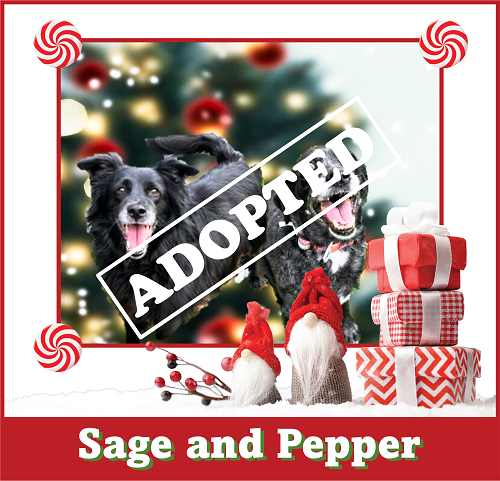 Our ninth Stray of Christmas is actually a dynamic duo! These adorable seniors are happy jolly souls who love hugs and cuddles. No magic hat is needed with these two girls; they are a bonded pair and are as sweet and content as they come! They love to play fetch, are great to walk on leash, and would make great couch potatoes when not on outdoor adventures. Christmas is not about opening presents, but opening your hearts… Sage and Pepper are waiting to win over the hearts of their forever family! 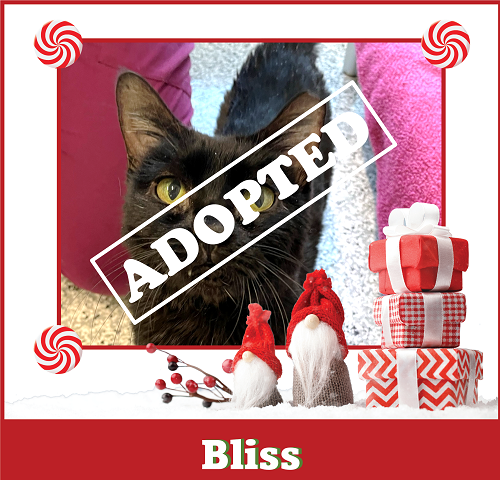 Our tenth Stray of Christmas is a darling cat named Bliss. She’s a 9-year-old sweetheart who gets along with everyone she meets, including other cats, kids, and adults. She may even do well with dogs with her personality!  She’s looking at a Blue Christmas without a forever family, but if you adopted Bliss, your heart would be light, and all of Bliss’ troubles will be out of sight… so adopt Bliss and have yourself a merry little Christmas now! 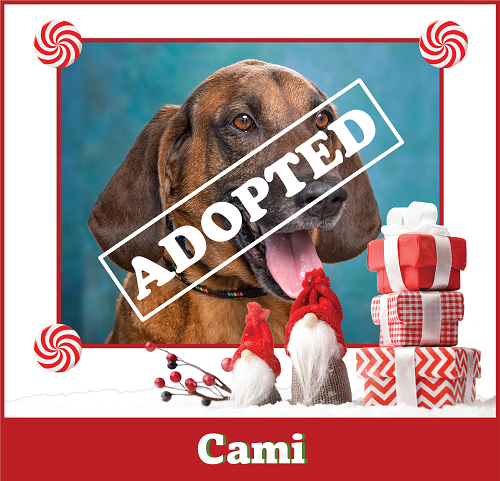 Cami is the Idaho Humane Society’s eleventh Stray of Christmas. She’s an 8-year-old coonhound mix waiting to hear the bells on Christmas day with her new forever family. Cami loves exploring with her nose and if she could do that every day, she would be content, dreaming of peace on earth, and goodwill to men. She has met other dogs here and has done fine, but we do recommend that she is introduced at a slow pace for a careful introduction. She will bring good tidings to you and your kin! Not only good tidings for Christmas and a Happy New Year but all year around. 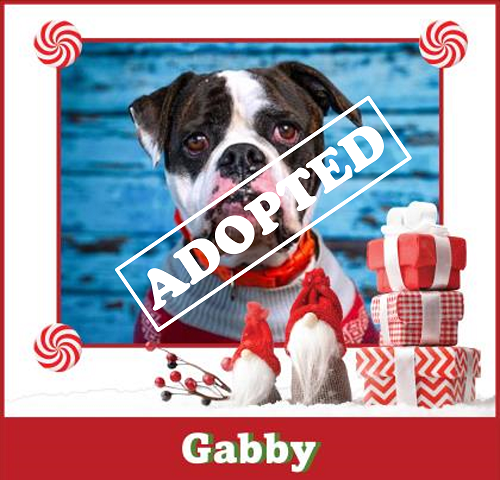 On the 12th day of Strays, the Idaho Humane Society gave to me… a sweet gal named Gabby. She’s a 3-year-old female who is looking for a forever home for cuddles and warmth. She is a big fan of people including kids and loves treats. She already has obedience training and has a great foundation for settling quickly into a new home. She will need a dog introduction prior to adoption if there are other dogs in the home.